How to Get Out of a Franchise Agreement 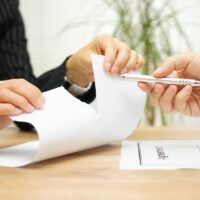 Entering into a franchise agreement is an exciting venture. You have the opportunity to run a business without having to build it from the ground up, getting the benefit of an established client base, marketing, operational organization, and goodwill of the customer base. Unfortunately, even successful business models do not always work in all locations. If you find yourself running a failing franchise, how can you get out of your contract? Continue reading for advice on getting out of a franchise agreement, and contact a knowledgeable Houston business law attorney if you need assistance with a Texas business law matter.

Termination Clauses in a Franchise Agreement

What is a Material Breach?

Likewise, a franchisee can likely terminate a franchise agreement when the franchisor has done any of the following:

Not all franchise agreements include termination clauses that specify when a franchisee is permitted to terminate, but under the principles of contract law, any party can terminate a contract when the other party has committed a material breach, regardless of whether it is stated in the contract. Additionally, if you retain the services of an effective business law attorney upon negotiating your initial agreement, you will be sure to have a termination clause upon which you can rely should the franchisor break their side of the contract.

If you need legal assistance with a Texas business matter, contact the dedicated and detail-oriented Texas business lawyer Leigh Meineke at the Houston offices of Leigh B. Meineke Law Firm by calling 832-706-0244.

By Leigh B. Meineke Law Firm | Posted on September 28, 2020
Leigh B. Meineke is the founder and principal attorney at the Leigh B. Meineke Law Firm, where she has been advising and representing individuals and businesses in Houston and Harris County since 1995.
Leigh has been practicing law with area law firms since 1980 and excels in the fields of business law, estate planning and probate, and real estate and construction law.
In addition to her legal practice, Leigh spent 13 years as an adjunct professor at both the University of Houston and Houston Baptist University, teaching classes on business law and human resources management.
Read More